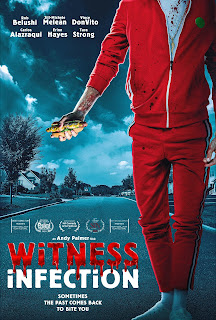 “Always leave one in the head!”

Witness Infection (2021) is like a delicious repast made from leftovers. While the ingredients are familiar, mobster movies, rom-coms, zombie invasion films, they get mixed together into a unique dish. Occasionally the meal devolves  into an overcooked, tasteless mess by relying on overused stereotypes, this liberally spiced gangster-zombie-romcom is saved by a quick witted, funny script and over-the top gore. There are plenty laughs, thrills and even a little pathos to balance it all out. Some viewers may left hungry  for more substance, over all, it is a fun meal to feast on.
When Clemenza schools Michael on the art of cooking for 20 in The Godfather, Francis Ford Coppola forever linked together Italian families and food in cinema. Director Andy Palmer and co-writers Carlos Alazraqui and Jill-Michele Melean continue that tradition with a skilled cast of veteran comedy actors to create a movie about food, family, and the intestines that tie them together.

“Is this right or did I just wake up in Game of Thrones?”

The story of rival gangs competing against each other in the same town goes back nearly a hundred years to Dashiell Hammett’s novel The Red Harvest. That book went on to inspire many critically acclaimed movies such as Akira Kurosawa’s Yojimbo, Sergio Leone’s A Fist Full of Dollars and most recently the Walter Hill gangster film, Last Man Standing. Witness Infection doesn’t aim for such lofty accolades. Filmmaker Andy Palmer stated his goal was to “do for eating sausages from a questionable looking food truck what Jaws did for swimming.”The story’s rival mob families, transplanted to the same city by Witness Protection, face mutual assured destruction unless they find a way to peacefully coexist. Their somewhat archaic solution is to join the families by an arranged marriage between a reluctant Carlo Serrelli (Robert Belushi) and Patricia Miola (Errin Hayes). Carlo is torn between staying true his partner and girlfriend, Gina (Jill-Michele Melean), and his duty to save his family from the upcoming mob war if he does not go through with the wedding. The night of the engagement announcement coincides with the arrival of a food truck selling tainted sausages that turns the customers into flesh eating zombies. Carlo quickly discovers he has more pressing dangers than surviving his in-laws. Chaos ensues.

“I refuse to be the token death of this story!”

This dish of leftover salsiccia e peperoni offers plenty of good stuff to enjoy. Especially for gourmands of the type of movie Witness Infection roasts. There are great action scenes, a very well fleshed out group of characters and a script that carefully walks the fine line of being funny without being too meta.

One special highlight is when Carlo, Gina and Vince and encounter  Rose (Monique Coleman). As the sole black character, she delivers probably the best summary of African-American inclusion and representation in horror movies while casually dispatching zombies over her shoulder. Her allusion  filled monologue simultaneously declares an end to the magic negro trope and honors the actors whose characters didn’t make it to the end of the story.

“And I also may or not have been involved in a hit and run.”

Despite all the good things, there are a a few hints of  stale and sour the dish tastes. The film loses a lot of momentum during the extended period(s) when Carlo, Gina, and their cinema-loving friend Vince (Vince Donvito) drive through the night. Their confessions to each other are treacly, unfunny filler to pad out its 81 minute running time.

Even more troubling is the off color and grossly stereotypical representation of Italian Americans and foul treatment of the female characters to generate cheap laughs. The tracksuit and gold chain sporting mafiosos and junior hoodlums have less in common with the urbane and erudite hoods from The Sopranos than the inarticulate, oozing zombies they turn into. Carlo’s brother Dominic (Bret Ernst) delivers most low-brow, offensive lines. His liberal use of pejorative terms for female’s anatomy strike an unduly harsh note. This might not be offensive to some, but it does not make the film any funnier.

“This, my friend, is New Jersey’s finest Italian sausage”

The makers of Witness Protection show real love to sources the films it skewers. While it doesn’t quite achieve the fear of food trucks filmmaker Andy Palmer aimed for, it is still a fun ride into questionable gastronomic fields. For what could have easily been written off as another gross out, and it is gross, horror comedy about zombies and gangsters, this movie has a lot of heart. Co-writers  Carlos Alazraqui, and Jill-Michele Melean went to great pains to create credible characters for an entertaining and amusing story to keep the audience engaged in between the gags and gross-outs.
The bottom line -Witness Protection made me laugh and care about the characters and story to stay engaged to the end.
Before being released on VOD March 30, Witness Infection screened in many horror and comedy festivals around the world. It won several awards including Best Feature at HorrorHound and the Die Laughing Film Festival, Best Director at Die Laughing and the Frostbite Film Festival, and the Audience Choice Envy Award the Sin Film Festival.

It is now streaming on multiple platforms.
Posted by mwilliams1220 at Saturday, April 10, 2021