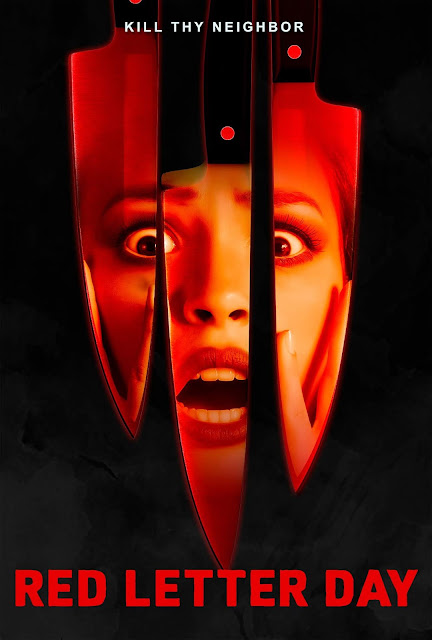 "Do we have to have another discussion about consent?"

Synopsis: The Edwards family, Mom Melanie, daughter Madison and son Timothy (Dawn Van de Schoot, Hailey Foss, and Kaeleb Zain Gartner) are settling into their new home. The kids complain that the new neighborhood is boring, not realizing that today is going to be a red-letter day in the worst possible way. A shadowy group called "The Unknown" has delivered a series of Red-Letters to the community pitting neighbors against each other based on their conflicting social media personas. In order to survive, the Edwards must be prepared to do what ever it takes to stay alive as they realize their new home is anything but boring.

At a brief 75 minutes writer and directer Cameron Macgowan's Red Letter Day uses it's time to dramatize how easy it is for a smart foe to weaponize our distrust and fear of each other as the members of a community find themselves manipulated into violent confrontations. Much like the Twilight Zone episode The Monsters Are Due on Maple Street (March 4, 1960), the neighborhood's families isolation plays a vital role in the chaos that follows just the smallest of disruptions. Both works start from the same place: the things we believe will make us safer actually make us more vulnerable. Rod Sterling's voice-over epilogue is worth repeating here: "There are weapons that are simply thoughts, attitudes, prejudices.... For the record, prejudices can kill...and suspicion can destroy....And the pity of it is that these things cannot be confined to the Twilight Zone."(Source)

The residents of Aspen Ridge, Red Letter Day's version of Maple Street, are forced to answer this question: What would they do if their most hated, online person were coming to kill them? Would they attempt to head them off at the door to hug it out or go out to find them first, meat tenderizer in hand?

Technically, Red Letter Day is well made - shots are in focus, sound is adequately mixed, sets look great if not a little over decorated, and so on. The action scenes are satisfyingly gory, although the first one doesn't happen until nearly halfway in! The aforementioned meat tenderizer does some serious damage to those that would hurt the Edwards. It delivers a vomit inducing wound to Luther (Roger LeBlanc), Maddie's boyfriend I cringed everything it appeared! Also, those are bits of flesh stuck on the drill bit and bones poking through flesh added to the pulse pounding mayhem.

It is when the characters begin to talk that the movie goes off the rails. The dialogue is clunky and at times seems to be cut and pasted responses from a social media argument when everyone agrees that no one is listening, but they are going to have their say. The movie would have been easier to watch if the actors were given a natural voice to deliver their lines instead of the overly self-conscious, declamatory style. Melanie's character is especially guilty of this. Macgowan seems to value quantity over quality and too much of her dialogue is superfluous yet delivered in a strident I-am-the-mother voice. As one of the chatroom guys writes during the Live-Stream climax, "Stop Talking!"

Sometimes the characters actions do not make sense except as macguffins to force the plot along. A great example occurs when Timothy is fighting Cat Walking Guy, his personal nemesis. Maddie abruptly abandons him to go find her boyfriend. Timothy has already had his hand ground into meat and his leg is broken, but she needs to check in with her scum-bag boyfriend right now? For what purpose? So she can be captured and Melanie has to rescue her.

Ironically, a movie about the dangers of isolating into our own enclaves and cliques burns itself out by it's shameless pandering to outsider-culture. Packing as many "Only true fans will appreciate this" Easter eggs into the background distracts from Red Letter Day. The are an abundance of horror-themed and related (I think I spotted a GG Allen poster at one point and several Doom metal references \m/) esoteric items in many scenes to appeal to any horror lover's ego. Luther's basement had posters for movies I had never heard of, and I think I am pretty well educated in the genre. And while everyone loves Re-Animator, mentioning it several times won't make everyone fall in love this movie. The truth is, attempting to stand on the shoulders of giants could not make this movie better. It only highlighted it's most basic flaw, that there just was not that much to fall in love with to begin with.