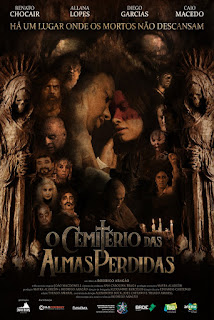 The present is formed by history and battles started hundreds of years ago are still waging on. Brazilian writer-director Rodrigo Aragão’s newest film, O Cemitério das Almas Perdidas (The Cemetery of Lost Souls, 2021) is an engrossing and dark fantasy that uses the fight between the shamanism of Brazil’s indigenous people and the staid, oppressive and exploitative Catholicism of the Portuguese colonists. The movie opens with a dedication to José Mojica Marins, Brazil’s most well-known horror icon: Zé de Caixão/Coffin Joe. AragãoIs is telling the audience to prepare themselves for a history lesson through the lens of horror.

The European’s violence was one of the tools the colonists used to subjugate the Brazilian natives. Catholicism with its hierarchical nature taught the survivors their “place” in the hierarchy equaled their (lack of) power and (lack of) agency. Catholicism does not abide competition, so the Indian’s beliefs had to be forcefully eradicated. Both religious paths are represented by powerful figures that dominate the story. A powerful female shaman fights with a corrupt Jesuit priest, each with their own unique weapons.

The Cemetery of Lost Souls saga spans several centuries, beginning when Brazil was Portuguese colony and ending in the mid-20th century. In the opening scenes, a Jesuit priest (Renato Chocair) murders the Grande Inquisidor and steals a Satanic grimoire, a book of spells dictated by Satan. The spells in the grimoire calls for fresh human blood. The priest begins performing miracles, each one preceded by a murder, and a cult of believers grow around him. Now calling himself Cipriano he and his followers travel to Brazil.

Once in Brazil, the cult occupies itself with slaughtering the indigenous people. Cipriano becomes obsessed with Ayra (Allana Lopes), a shamanistic woman who narrowly escaped her village’s massacre. He imprisons her in the church, hoping to learn the secrets of her people’s religion.Before Cipriano can interrogate her, a fearful looking tribe of cannibals attacks the church and cemetery to rescue her. During the ensuing battle Cipriano uses the grimoire to transform himself, Ayra and the cult into invulnerable, bloodthirsty revenants. Joaquim (Caio Macedo), a member of Cipriano’s coven, escapes with volume and uses it to seal them inside the cemetery. Cipriano reaches through the gates and struggles with Joaquim, tearing the grimoire in half, rendering it useless and trapping them all inside the cemetery.
In the 20th century, the native village is now a small community of fervent Catholics who live in fear of monsters trapped in the cemetery. As in the Old Testament, the townspeople offer blood sacrifices to Cipriano’s coven for protection from them. This blood tax is paid by hapless travelers the villagers capture and take to the cemetery on the new moon of each month. When a traveling grand guignol troupe arrives at the village, they quickly find themselves headed to the bloody altar inside the ruined church. Jorge (Diego Garcias), a member of the troupe, discovers that Ayra has been sending him dream messages his entire life to prepare him to battle Cipriano and his minions. Together the beings and their inverted Christianity.

While The Cemetery of Lost Souls may open many doors into the worlds of history, magic and adventure, it scarcely has enough time to adequately explore them all. The battle scenes are likewise bloodied fights as axes slash into bodies and fresh wounds freely gush. Is easy to lose track of the complicated, multilayered story amidst all this blood and action. The plot relies heavily on several time-jumping flashbacks that leave many unanswered questions about the characters. Overall though, as Fred (Francisco Gaspar),the grand guignol troupe’s master of ceremonies promises, The Cemetery of Lost Souls is a story full of horror, action, and magic and one worth watching intently.
I was able to review this movie courtesy of Fantaspoa, Latin America’s largest fantastic film festival. This year’s festival is online and free (but only in Brazil). All films are streamed for free on streaming platform Darkflix, Additional details are available at www.fantaspoa.com.